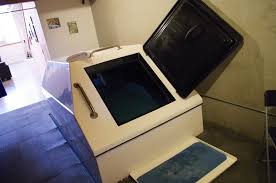 In 1953, Dr. John C. Lilly wondered what would happen if you did not have to experience stimulation from the outside world. Lilly worked at the National Institute of Mental Health in Bethesda, Maryland as a neurophysiologist. The question of sensory deprivation led him to develop the first isolation tank, also referred to as a sensory deprivation tank. Doing experiments in the Virgin Islands at the National Institutes of Mental Health Lab, Dr. Lilly created the design for the isolation tank and had his experiment with the tank running by 1954.

The idea for floatation therapy was based on REST, or Restricted Environmental Stimulation Therapy. This is a scientific way of looking at deep relaxation. REST was developed in 1954 at the National Institute of Mental Health. Floatation uses REST to trigger deep relaxation that is significantly deeper than regular sleep and more difficult to achieve. Dr. Lilly believed that floatation was the perfect therapy for REST because it would reduce external stimuli such as light, gravity, touch, and sound without necessitating harsh conditions.

From 1960 to 1970, Dr. Lilly changed his experiments, attempting different solutions of Epsom salt and water for floatation. He used a soundproof chamber and also worked with heating the solution to normal body temperature to reduce reactions to a temperature that was too hot or too cold. In 1972, Dr. Lilly met Glenn Perry at a workshop. They began to work together, and Perry designed the first floatation tank for widespread use. The two began a business for the tanks: Samadhi Tank Co., Inc.

After Glenn Perry designed the first widely used tanks, demand began to grow. Individuals who have been involved in Dr. Lilly’s floatation experiments requested floatation tanks in their homes. Perry then married Lee Leibner, who had studied floatation and its use for children with learning disabilities and hyperactivity. They worked together to create and sell the first tanks that could be used commercially and in one’s home. The market grew quickly throughout the 1970s, and Gary Higgins opened a business called Float to Relax. This company expanded with floatation centers across the country.

In 1983, floatation tanks began being used in health spas and hydros. These establishments have become widely popular, particularly in the past 10 years. Individuals can now find floatation centers across the world. There was also a noticeable rise in interest in floatation in 2011. You can learn more about trying floatation therapy from Northwest Float Center or contacting us with any questions.