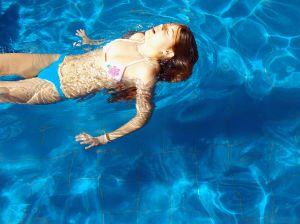 The National Fibromyalgia Association reports that nearly 10 million people in the United States suffer from this disease. This condition arises after physical trauma and produces symptoms that include overall body pain, anxiety, fatigue, and problems with sleep.

First presented at Float Summit 2012, The Fibromyalgia Flotation Project study demonstrated the benefits of floatation therapy for patients suffering from Fibromyalgia. The study worked with 81 participants from five different countries by surveying them about their symptoms before and after floatation. The questions on the survey were presented using a rating system from 0-10 on topics such as pain, muscle tension, freedom of movement, stress, energy, relaxation, and well-being. In this study, improvements in symptoms across the board were reported after using floatation therapy.

In the first section of the Fibromyalgia Floatation Project, results measured for a variety of pain-related symptoms, including: 1) overall pain level; 2) how much the participant was bothered by the pain; 3) muscle tension; and 4) ease of movement. Questions for each of these categories were asked before and after each float session. Not only was there significant improvement in each category, but there was also an overall reduction of pain-related symptoms with each additional float session.

The study also aimed to cover the mental strain of fibromyalgia. Before and after float sessions, participants were asked to rate their feelings regarding stress, anxiety, sadness, energy, well-being, and relaxation. Significant decreases were noted in anxiety, sadness, and especially stress. There was also improvement in relaxation and well-being, as well as moderate gains in energy.

Because of the significant reduction of anxiety, stress, and pain, the participants of this study were able to sleep better. A preliminary survey was taken to assess the amount and quality of sleep to which participants were accustomed. The same questions were then asked about the night immediately following floatation therapy, as well as any longer-term improvements in sleep. Participants reported to achieve nearly a half an hour more sleep after three float sessions, and improved their sleep quality by 2 points (from 5 to 7 on a 0 to 10 scale).

The findings presented at the Floatation Summit 2012 were mostly short-term results. However, there were two case studies that indicated increased improvements over a longer stretch of time. As such, more research is being conducted to determine the long-term effects of floatation therapy on more people who suffer from fibromyalgia.

What It All Means

Results from the Fibromyalgia Floatation Project, along with continued research, suggest that the effects of floatation therapy on people with fibromyalgia is significant. It not only reduces pain, but decreases stress, improves well-being and aids in quality sleep.