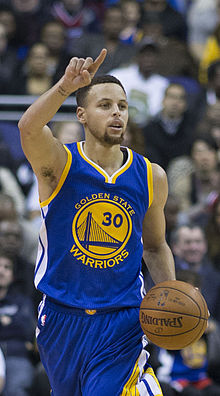 Floating is something people of every age and background can enjoy and benefit from. It’s not something reserved for the rich and famous, but many celebrities do enjoy it. If you follow celebrity news, you may know a bit about celebrities who float. If not, allow our profiles to shed some light on a few of your favorite celeb’s floating habits.

Stephen Curry is one of the most famous players on the Golden State Warriors basketball team. The writers at Men’s Journal and other news sources speculate that floating may be behind his incredible athletic performance. Curry floats at the Reboot Float Spa in San Francisco, and has reported its virtues.

Specifically, Curry points out how floating takes pressure off the muscles in the neck and spine, body parts basketball players rely on to perform well. Michael Garrett, owner of Reboot Float Spa, agrees that floating helps these muscles “decompress and realign naturally,” protecting athletes and other clients from pain, injury, or re-injury. While it has not been proven, some people speculate floating may improve cognition for athletes like Stephen Curry and make them smarter, more creative players.

Floating isn’t just for muscle relaxation and stress reduction. Singer/songwriter John Lennon of the Beatles reported floating helped him kick his heroin habit in the late 1970s. He also reported feeling healthier than he ever felt. When used properly, floatation therapy does help addicts. It may reduce their cravings for drugs and provide a healthy alternative to self-medicating.

Actress and comedienne Kristen Wiig is another frequent floater. She has spoken with David Letterman about her experiences and particularly touts how great her skin feels after a session. Indeed, the Epsom salts used in float tanks exfoliate your skin and naturally remove toxins from the body. Wiig also points out that the entire body feels rejuvenated after a session.

Although fictional celebrities, the Simpsons are a great example of how floating helps people mentally and emotionally. During one episode, Lisa is irritated with Homer, because she thinks he is boorish and culturally illiterate. Once she enters the tank though, she is able to calm down, refocus, and better understand how much her dad loves her. After the session, Homer and Lisa are better able to communicate. Real families who use float tanks together have reported similar results.

If you would like to schedule a float session for yourself or your family, contact NWFC today. Our sessions begin as early as 8 a.m. and can be worked around your schedule.